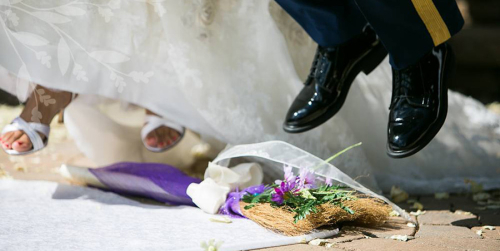 A broom placed aslant in the doorway is a symbol of holy matrimony.
The bridegroom would jump over the broom into the house followed by his bride.
If either of them touched the broom, the doorpost, or moved the broom in any way,
the marriage was void.

The Broom Jumping Ceremony was a public observance for the purpose of childbearing
and was interpreted as a partnership not ownership.
To get a divorce, the couple just jumped back over the broom backwards.
(This was a Welsh Tradition – “They jumped over the broom!” ~when a couple gets married)

If a sweeper drops a broom, she will get married the same day next year.
(German Folk Saying)

If you wish to avoid ill luck which follows sweeping at night,
all you have to say is: busy, busy, for I am receiving the bride and groom.
(Japanese Folk Saying)

If your feet are swept across accidentally, it is a sign that you will not marry.

“Don’t sweep a circle around me; I want to marry again when you die,”
This is the way the idea is sometimes expressed.
(A Kentucky Mountain Folk Tradition)

If an unmarried maid steps over a broom she won’t have a marriage proposal that year.
(Lithuanian Folk Saying)

It was a custom in one Italian town that the first task of a new bride was to use a broom.

To have luck in married life, a couple should step over a broom on entering their house.
(A Kentucky Mountain Folk Tradition)

When a broom falls, someone will marry.
(Italian Folk Saying)

*Many of the pictures found on this website are courtesy of my neighbor and friend, Gwen Balogh. We will continually update the website pictures with Gwen’s assistance. Thank You Gwen!